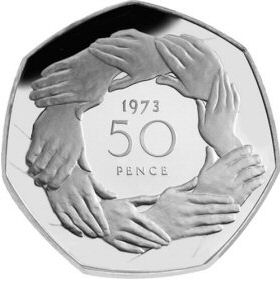 The 1973 UK join European Economic Community - EEC design is the third rarest 50 pence coin in circulation and has a value of 50 pence, but collectors of coins currently pay £2.28* to own this coin.


Additional information about this 50 pence coin:

Notes: Entered Circulation data from The Royal Mint website. *Active Circulation is an estimated figure based on an assumed year on year reduction in circulating coins.